House prices have slumped in Australia - around 3 per cent nationwide, but as much as 5 per cent in the Melbourne market and more than 7 per cent in Sydney.

With Auckland's market already stalled and tracking sideways, will we see the trend migrate across the Tasman?

In a report released today, ASB economists have looked at the historic correlation between the Australian and New Zealand markets.

The good news: there are a few variables which suggest the flow through might be tempered this time.

Smith analysed the historic house price data for both nations over the past 25 years.

The results showed a positive two-way relationship between the two markets, with Australia typically having a stronger influence on the New Zealand market than vice-versa.

Sydney prices also appeared show a stronger influence over Auckland prices than did the prices in cities like Melbourne and Wellington.

Typically the New Zealand market responds to Australian house price movements, with a peak impact after about six months, he says.

On that basis the big slump in the Sydney market in the past six months doesn't bode well for Auckland. 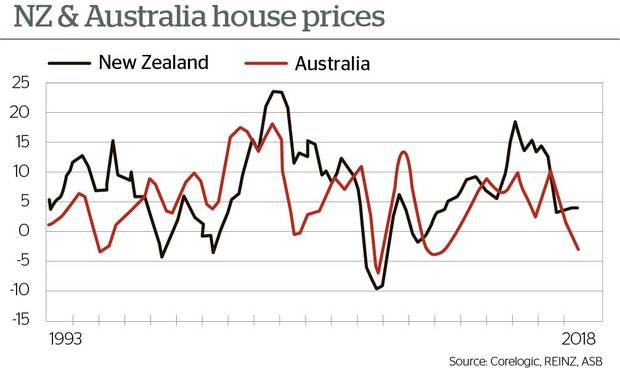 However, he notes that some of the key variables in the two markets may temper the flow through to Auckland and New Zealand this time.

Both New Zealand and Australia have moved to address supply issues in the past few years but Australia has generally been more successful - building more dwellings in relation to population size than we have in New Zealand.

A regional analysis showed that while Auckland building consent issuance "has ramped up considerably over the past few years it pales in comparison to sizeable increases in Sydney".

"This could be one factor resulting in New Zealand house prices outstripping those in Australia," Smith says.

Also conversely, the slump in Australia has put downward pressure on mortgage rates which has flowed through to the New Zealand market and will help to underpin prices here, he says.

Smith concludes that mortgage rates and net-migration are significant drivers of the New Zealand market.