Most of Otago has maintained double-digit increases in average house values compared with a year ago, and the Queenstown Lakes region has topped the country with a $1.1 million average.

While the wider Auckland region registered $1.04 million in the latest Quotable Value data for November, several suburbs in the city were higher than Queenstown Lakes, ranging from $1.2 million to more than $1.5 million.QV national spokeswoman Andrea Rush said the latest index showed nationwide residential property values had increased 6.4% during the past year, a much faster rate of increase than last month's annual growth of 3.9%.

''It appears the spring-summer upturn has finally arrived in the housing market,'' Ms Rush said.

Nationwide value growth surged 3.6% during the past three months, led by stronger growth in Wellington, Dunedin and many other regional centres around the country, Ms Rush said.

QV Dunedin property consultant Aidan Young said Dunedin's values had continued to rise, increasing 13.1% in the year to November to $386,326; or 2.8% during the past three months, and were now 35% higher than the previous peak of 2007.

''The first home buyers' market remains competitive with multi-offer scenarios still common, but there are reports of some large variances in both offers and or conditions,'' he said.

There was still strong demand for vacant land in Mosgiel as some of the larger developments neared completion in that area.

''The market is currently seeing plenty of activity,'' Mr Young said in a statement.

Ms Rush said it was a ''mixed picture'' in the South Island regional centres, with some areas still rising and others seeing values flat or dropping.

The Mackenzie district continued to see very strong growth and values in Tekapo had now topped $800,000. Southland values jumped 7.8% over the past three months and Invercargill was up 4.6% for the same period.

However, values were down for the past quarter in Ashburton, Kaikoura, Timaru, Clutha and in the West Coast districts of Buller, Grey and Westland. 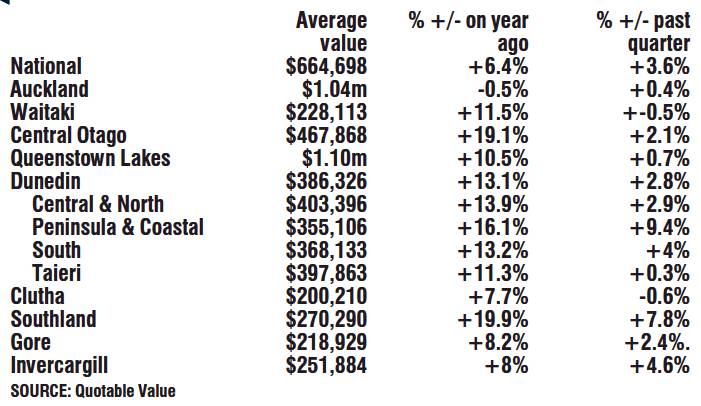