Quarterly Otago median house prices appear to show a rapid cooling for the third quarter of last year, but post-election jitters appear to be dissipating as would-be buyers adjust to changing housing policies.

QV National spokeswoman Andrea Rush said there had been a cooling before the election but following the result and new policies being announced, it appeared many regional areas had seen a summer lift in activity and demand over the final quarter of the year.

However, she said the actual third-quarter QV data showed a cooling in the regional centre market, following a more weighted downturn in Auckland.

Ms Rush said there had been a slow-down in the investment market. Investors were holding off making any purchasing decisions until they had confirmation of government policies.

"This uncertainty was further fuelled by the banks, when they tightened their lending requirements," she said.

The slight easing of the Reserve Bank’s loan-to-value ratio (LVR) restrictions would "certainly help" to excite the market again.

"Although I don’t anticipate this will have a major overall impact and the bright line test [being pushed out from two to five years] will make it more difficult for investors to flick properties without paying tax on profits," Ms Rush said.

Despite the recent uncertainties, property values had remained largely unaffected, she said.

"All in all, the election had a relatively small impact on Dunedin property values and investor confidence, particularly now the result has been confirmed and policy announcements made," Ms Rush said.

QV Dunedin-based registered valuer Aidan Young said there had been a significant number of sales coming through before Christmas and market confidence "certainly remains high".

"I think the Dunedin market has continued ticking on well, as we have over the past 18 months," he said.

Dunedin had seen a steady gain over a long period of time, which differed from larger cities, such as Auckland and Christchurch, where there had been a slowing in the rate of growth, and even slight negative growth during 2017.

"Dunedin has seen a recent slowing of the growth rate during the winter months, but certainly nothing overly dramatic and the market has picked up with the arrival of summer," he said.

While Wanaka, Queenstown and its surrounding suburbs make up the top six of  Otago’s 10 priciest areas, their gains during the past quarter have struggled to hit 1%.

She said high prices as well as higher LVRs requiring much higher cash deposits combined with retail banks’ stricter lending criteria meant many buyers were unable to secure finance to purchase around Queenstown.

"This resulted in many buyers being taken out of the market and a lower sales volume," she said.

She expected an increase in activity to continue over the traditionally stronger summer selling period, until about a month after Easter, before tapering off as the market tended to do before going into the winter quarters. 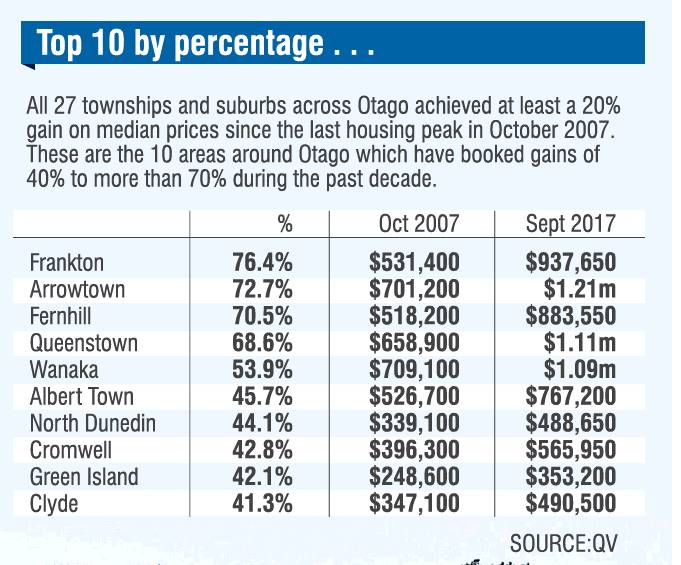 Around Queenstown and Central Otago, a number of new developments were under way,  with good demand for product, and while value levels were maintaining a growth phase, that was at reduced levels.

"This is expected to continue for the next few quarters," Ms Rush said.

In his outlook for Dunedin during 2018, Mr Young said that based on current trends, the outlook appeared positive.

"Were anticipating that the easing of LVR restrictions and bank lending criteria, as well as stable interest rates, will help.

"This, coupled with migration into Dunedin, should have a positive impact on purchasing activity and on the rental market," Mr Young said.

Dunedin also had a market which suited first-home buyers, who have access to low-cost capital, because of the low interest rates, and entry-level house prices around the city were relatively low, he said.

Proposed projects such as the Steamer Basin development and continuing development of Vogel St, created interest in the region and ultimately kept people here, he said.